Why isn’t fixing our broken food culture higher on the 2020 agenda?

Food is both a primary driver of poor health and a gateway to better health. It prevents heart disease, stroke, and type two diabetes, and yet is also this nation’s primary cause of the same conditions. Diabetes and heart disease cost the United States $1.72 trillion in Medicare, Medicaid, and lost productivity – more than twice what we spend on national defense.

Yet, our broken food culture is mysteriously absent from the 2020 debate agenda. Last night, during the latest Democratic debate, not one of the interviewers raised food/health, nor did any of the candidates mention it proactively during their two hours on national television. Fixing the broken food culture is an issue that should appeal to liberals, conservatives, the old, the young, men, and women alike.

Everyone eats. And no one likes to get sick. This should be glaringly obvious.

We know that 10 foods – and eating too much or too little of them – are at the root of nearly half of US deaths from heart disease, stroke, and type 2 diabetes each year. 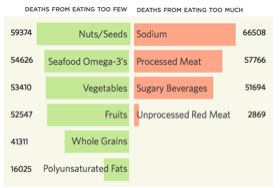 So the goal should be to make the good stuff (green) more available. And to work hard to curb sodium, sugary beverages, and processed meats. The ways to do this are many and range from policy to practice.

Before candidates hit the debate stage next, here are some possible questions for the next debate that would engage candidates on these critical issues:

Any of those questions would kick off a much-needed dialogue around the incredible potential of food to help us all live well – and around government’s role in food policy.