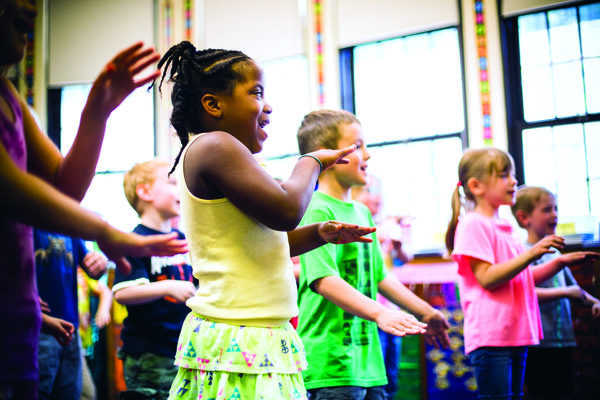 Everybody needs a break. And at Robert Gray Elementary School, kids get them.

They dance. They jump. They do yoga. Just for a few minutes, to shake away the cobwebs when they’ve been sitting at their desks too long. Then they settle down again and get back to work.

“I like to do the jumping jacks,” said Breyelle, who’s in fifth grade. “It kind of clears my brain.”

Studies show she’s right, but teachers are sometimes hesitant to pause a lesson when there is so much to cover. Principal Kala Lougheed makes sure they know that not only is it okay, but that she expects them to do so.

“One of the main challenges in starting this program was making sure the teachers knew they had permission to do this, that I expected them to do this,” she said. “In fact, I do data tracking to make sure the kids get at least one break per day.”

The brain breaks, as Lougheed calls them, are part of Robert Gray Elementary’s commitment to providing an active school environment. Let’s Move! Active Schools, of which PHA is a partner, helps to ensure kids get at least 60 minutes of physical activity each day, in keeping with research that shows children who move more also behave better and are better able to learn.

Only about 25 percent of children between the ages of 12 and 15 meet the recommendation to get at least 60 minutes of exercise a day.

On top of the brain breaks, the school has revamped its recess program. Lougheed brought in consultant Playworks to advise staff on healthier, more structured activities to engage the school’s 470 students during a 45-minute daily physical activity program that supplements twice-weekly physical education classes. The school has been recognized for its outstanding efforts in the two years that it’s been an Active School and has won several grants as a result. One grant allowed the school to start a flag football program. Another provided yoga lesson plans, training and mats.

Many Active Schools also teach kids about the importance of good nutrition, which is needed to fuel their activity. Breyelle, who wants to be a doctor when she grows up, volunteered to help her classmates stay on track with making healthier food choices. As a Fit Hawk, she gets to patrol the cafeteria seeking out kids who’ve chosen healthy foods, such as the breakfast fruit and yogurt parfait, and reward them with stickers, pencils and bracelets.

Fourth grader Mai-Li loves the new games at recess, especially ice cream tag, which involves running like crazy at the sound of “banana split!” She sneaks in the occasional cartwheel because, she said, “I just think it’s fun.” She also enjoys the chants they do at the beginning of recess, reminding them to play fairly, and at the end, reminding them, “it’s time to stop playing and now we need to work.”