Drink Up! — Creating a Thirst for Water 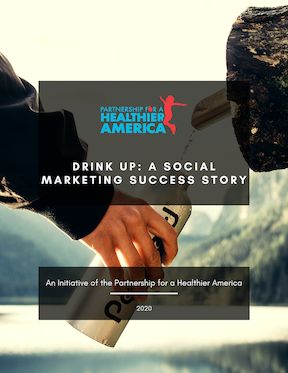 In 2013, the Partnership for a Healthier America and then First Lady Michelle Obama set out to do something radical. Recognizing the power and impact of commercial marketing, we asked if the same tactics used by Fortune 500 companies to sell food and beverages could be leveraged to promote a simple action that could substantially improve public health. The result: PHA’s Drink Up! social marketing campaign, which told Americans “You are what you drink, and when you drink water, you Drink Up.”

Developed by leaders in the marketing industry, and with the support of organizations like Nielson, Drink Up grew through partnerships and a significant marketing effort. More than 50 supporters in the water community used Drink Up’s droplet brand icon on bottled water packs, refillable water bottles, delivery trucks, filters, outdoor taps, and fountains. Social media and in-person activations heightened awareness of the brand and its simple, positive message.

The campaign succeeded when adapted for targeted markets, including a Spanish language deployment in East Los Angeles, and when utilized by PHA’s convenience store partners. During the first and second years of the campaign, the brand increased bottled water sales by three and four percent respectively. In 2017 water became the most consumed beverage in America.

Drink Up helped to influence individual behavior and create new norms around water consumption. It also shifted the beverage marketplace in favor of healthier options. In celebration of its success, PHA sunset the campaign in 2019.

We are now excited to share what we learned from Drink Up through our latest white paper. The paper digs into Drink Up, from its foundation to its results, and identifies five insights that proved critical to its success. We believe these lessons can guide public health campaigns for years to come. Below are five key takeaways from our experience with Drink Up that we hope other social marketing campaigns will leverage.

5 Keys to Success, Takeaways from Drink Up