After serving nearly two terms as mayor of Newark, NJ, in October 2013 he was elected as New Jersey’s junior U.S. senator. Senator Cory Booker is connected to the people he serves and the challenges they face every day. 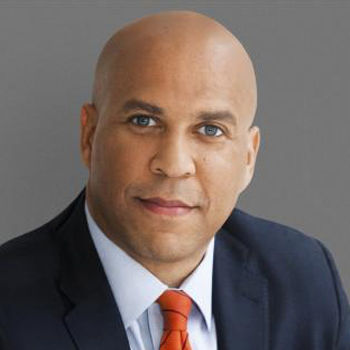 Since winning election to the United States Senate in October 2013, Cory has been innovative, persistent and put partisanship aside, bringing people together to get things done for New Jersey. Cory has focused on creating new jobs, improving economic opportunity for all New Jerseyans, speeding the pace of Hurricane Sandy recovery and addressing the economic squeeze facing middle class families.

The senator is working to break down the old partisan barriers that have made Washington so removed from the concerns of everyday New Jerseyans. He has reached across the aisle to work on issues such as reforming the criminal justice system to strengthen communities and save taxpayers money.

A news profile captured Cory’s approach to serving people all across New Jersey: “‘I want to be a different kind of senator,’ he said. ‘I want to push for real change on substantive issues, advocating for industry and jobs. But I want to create a record of doing, figuring out, how to replicate the best ideas … as a senator.”

Cory won a special election to fill the term of the late Senator Frank Lautenberg- and became New Jersey’s first African-American senator. He serves on the Senate’s Commerce, Science and Transportation, Small Business and Entrepreneurship and Environment and Public Works Committees.Under his leadership as mayor, New Jersey’s largest city, Newark, entered its biggest period of economic growth since the 1960s – the first new downtown hotels were constructed in 40 years, the first new office towers in 20. During Cory’s tenure, overall crime declined and the quality of life for residents improved with more affordable housing, new green spaces and parks, increased educational opportunities and more efficient city services.

Cory was born in Washington, D.C. His father, Cary, was from North Carolina and the son of a single mom, and his mother, Carolyn, is a Detroit native. They both worked for IBM and relocated the family to Harrington Park in Bergen County. Housing rights activists helped the family buy their first home after initially being turned down because of the color of their skin.

A star athlete at Northern Valley High School in Old Tappan, Cory earned bachelor’s and master’s degrees from Stanford University, where he also played for the football team. Cory ran a crisis hotline for students and worked with disadvantaged youth in East Palo Alto. He then attended Oxford University as a Rhodes Scholar where he ran a student tutoring and mentoring program in a disadvantaged community. Cory earned his law degree from Yale Law School, where he helped lead free legal clinics for New Haven residents.

After moving to Newark, Cory lived for eight years in Brick Towers, a low-income housing complex. He now owns a home and lives in Newark’s Central Ward community.